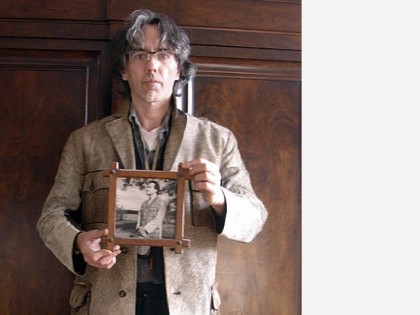 Bio
Harold Schellinx (Maastricht, the Netherlands) is an artist, writer, improvisor and creator of unusual and original musics. As a member of The Young Lions and several other post-punk bands in the Amsterdam of the late 1970s and early 1980s, he was among the initiating forces of the dutch ‘Ultra’ movement (the original dutch version of what internationally became known as ‘post-punk experimental pop music’). He was co-founder, editor and London correspondent of the dutch modern music magazine ‘Vinyl’, while pursuing (in Holland, Belgium and the UK) a range of widely acclaimed musical projects. These include ‘Commuters’ – a collaboration with German singer Dagmar Krause (Slapp Happy/Henry Cow), ‘Signs & Symptoms’ – with Peter Mertens, and a series of ‘pop fictions’ (‘Bogdan Wlosik’, ‘Agonie Ajournée’ …) – written and produced together with Ronald Heiloo.

Schellinx studied formal music and computer assisted composition with Gotfried Michael Koenig at the Institute of Sonology (Utrecht University), and mathematics and its foundations at the University of Amsterdam (PhD 1994).

Since 2000 his musical work has been based increasingly on his ‘sonic diary’, an audio cassette archive of monophonic recordings made of his (and others’) everyday activities, always with a lapel microphone and a dictaphone walkman. The ‘sonic diary’ covers a period of over 30 years.

He documents his and related work online since 2002 in the ‘soundblog’. He is editor-in-chief of Raudio, a collection of 24/7 audio webstreams hosted by the Amsterdam based artists collective PARK4DTV.

Schellinx is living and working in Paris (France) and Amsterdam (the Netherlands).