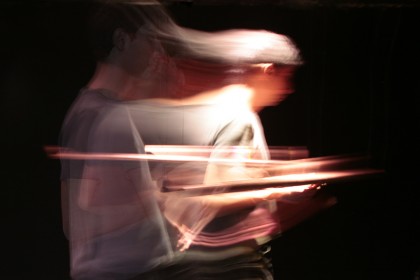 Bio
Emmanuel Madan is a composer, sound artist, and curator based in Montréal. He studied electro-acoustic composition in the early 1990s under the direction of Francis Dhomont. He then spent five years working in community radio broadcasting as an engineer, journalist, and producer. Since 1998, Madan’s main focus has been an artistic collaboration with architect Thomas McIntosh known by the name [The User]. To date, this duo has produced three major projects: Symphony for dot matrix printers, Silophone, and Coincidence Engines.

Madan’s solo practice currently includes a strong focus on radio and transmission art with works such as the talk radio remix performance Freedom Highway and the science fiction multi-channel transmission work The Joy Channel, (with Anna Friz). Madan has worked with Thomas McIntosh and Finnish artist Mikko Hynninen on Ondulation,, a synaesthetic composition for water, sound, and light. He has also collaborated with musician/composer Alexander MacSween and scenographer Simon Guilbault on Ground, an installation and performance based on the inductive properties of audio cables. Madan’s solo works include Final Vinyl, a performance for turntables and live signal processing.

Madan began an independent curatorial practice in 1998 with Incredibly Soft Sounds, a group exhibition of sound art created at the invitation of Gallery 101 in Ottawa. He was co-artistic director of the Silophone concert series (2000-2001), commissioning works from 25 Québec and international sound artists and musicians. Since 2007, he has directed the curatorial project Simulcast in collaboration with PAVED Art + new media (Saskatoon) and Struts Gallery / Faucet Media arts Centre (Sackville, NB).

Madan’s work has received many distinctions, including two awards from the FCMM Festival in Montréal (1998, 2001), an honourable mention from Ars Electronica (1999), and nominations to the Nam June Paik prize (2004), the Transmediale award (2010) and the Qwartz award (2010).